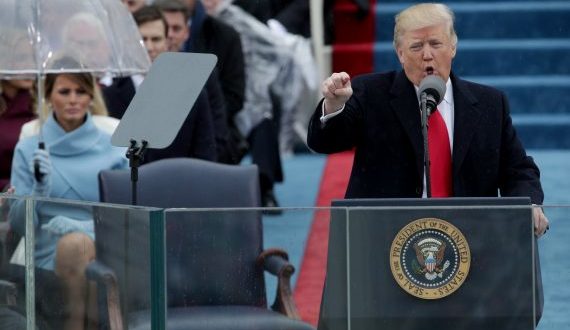 Surrounded by family and a few pals from the real estate industry, Donald J. Trump on Friday became the 45th President of the United States — and the first developer-in-chief.

“I will never, ever let you down,” Trump said during his inauguration speech. “America will start winning again like never before.”

Although Trump didn’t talk industry shop during the occasionally bleak inaugural address, his friends in real estate are filled with excitement about what he can do as president.

Leading up to the inauguration, many bigwigs in city real estate — Howard Lorber, Richard LeFrak, Steve Witkoff, to name a few — descended on Washington D.C., pressing flesh and sipping wine at various events reserved for the biggest campaign donors. Lorber said he was seated close behind Trump during the inauguration ceremony. Close-up camera shots of Trump repeatedly showed his son-in-law, Jared Kushner, directly behind the president and Melania Trump.

“When you’re in the real estate business, you’re dealing with risk-management every day,” Steve Witkoff said in Washington. “Reagan was a decision maker, and that’s what Donald Trump is going to be.”

Michael Cohen, executive vice president of the Trump Organization, who was just named personal attorney to the president, said Trump will be a boon to the real estate industry in New York City. He wouldn’t specify if his impact would be felt through deregulation, merely stating that his boss would “create jobs.”

“There’s going to be a lot of money in the hands of a lot of people,” he said the day before the inauguration. “When that happens, you’ll see a lot more home purchasing and a lot more construction, which is not only good for developers but for everyone.” 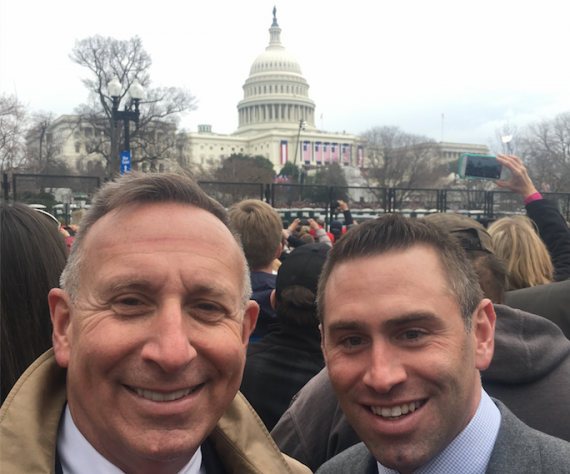 “This was my guy,” Pfaff said with a smile. “The whole dynamic, it was definitely change.”

“No one but Trump could have awakened the sleeping giant,” said Stephen Meister on his way to Friday’s ceremony.

Many of the sentiments aired by these New York real estate executives reflect the same spirit that the wider conservative movement is projecting right now.

“Jettison the naysayers,” Illinois Rep. Peter Raskom told a celebratory crowd at the “Peace and Tax Reform” gala on inauguration’s eve. The event was attended by powerful conservative figures like Grover Norquist, Ralph Reed and Trump campaign economic advisor Stephen Moore, as well as the Meisters.

“What was an obscure possibility, full comprehensive tax reform,” Raskom told the largely Republican audience, “went from an outlier concept to now more likely true than not true.”

“Can I get an amen?” Raskom asked in closing, prompting cheers.

Comprehensive tax reform is just one among many issues at play that could radically change the flow of profits to real estate businesses during the Trump years. EB-5, a federal program that grants foreigners green cards in exchange for an investment in U.S. businesses that creates jobs, could continue unabated under a Trump presidency.

On his way out the door, President Barack Obama proposed changes to EB-5 to curb abuses within the program, which alone brought back $8.8 billion in foreign investment in 2015. If enacted, the proposed changes could render EB-5 useless as a funding source for New York City developers. The hope — and, in many cases, expectation — among industry experts is that Congress won’t take a hatchet to EB-5 under Trump’s administration.

Another big-ticket issue is infrastructure. In October, Trump’s advisers unveiled a vague plan to spread roughly $137 billion in tax cuts in order to generate $1 trillion in private investment in infrastructure across the country. The details on how this will play out — in terms of federal spending and specific projects — remain quite fuzzy. What is clear is that some familiar faces will lead the council that will monitor the spending: Vornado Realty Trust’s Steven Roth and Richard LeFrak. And it’s not unfathomable to think Trump’s contacts in New York City real estate will be among the private interests that invest in Trump administration infrastructure projects or directly benefits from them.

Deregulating commercial mortgage backed securities through a partial or full repeal of Dodd-Frank is now in play, too (though the latter is a long shot). In December, risk retention rules set up during Obama kicked in, but they could wiped from the books with the Senate, House of Representatives and the executive branch now firmly controlled by Republicans. On Thursday, though, Trump’s nominee for Treasury Secretary Steven Mnunchin said he supported key elements of Dodd-Frank, notably the Volcker rule, which prevents banks from making certain kinds of speculative investments.

During his speech on the steps of the Capitol on Friday, Trump lamented that the nation’s infrastructure has fallen into disrepair and disuse. Much of his brief speech, however, focused on making “the people rulers of the nation” and putting “only America first” when it comes to matters of trade, immigration, and taxes.

“We are transferring power from Washington D.C. and giving it back to you, the people,” he said during the speech. “The establishment protected itself but not the citizens of this country.”

Many of “the people” waited more than six hours to watch Trump deliver his speech on large television screens set up in the National Mall and the Washington Monument. By 8:30 a.m., hundreds of people flooded Virginia Avenue, slowly winding their way to these areas, where those without tickets could view the inauguration. For them, it seemed worth it to celebrate a man who they believe, in the words of Nikki Darnes, of Tennessee, will “cut the red tape” and banish bureaucracy in government — a popular set of platitudes among yeoman Trump supporters.

“I’ve always thought that we need a businessman in office,” Darnes said. “Clearly, he likes to speak his mind, which is a good thing and a bad thing, but he’s got what it takes.”

Erik Smek from Stoystown, Pa., said that hundreds of people in the coal industry have lost their jobs since Obama took office.

“Obama said he was going to ruin coal country and that’s exactly what he did,” said Smek. He was wearing a pin that read “Trump Digs Coal.” “He was not a liar by any means,” he added.

Gary Sleppy, of Somerset, Pa., was wearing a rain fedora with a white band that read “Trump 45.”

“We think we need a president with balls and we finally got one,” he said.

While some protesters clashed with Trump supporters in the back of one of the Capitol grounds’ ticketed viewing sections, some were more covert about their dismay over Trump’s new role.

“I’m an interloper!” shouted Eddie Seger, of Delaware, explaining that he had a banner strapped to his back, hidden beneath his green poncho. The banner had “2,865,015” written on it, signifying the number of popular votes that Hillary Clinton won over Trump. “Hillary won the popular vote. He needs to lead with that in mind.”

He said he arrived in Washington by train at 5 a.m., took a nap and then got in line for general admission into the inauguration.

“My wife said if you’re in jail, don’t even call,” he joked.

Meanwhile, in New York, more police than protesters had formed a perimeter around Trump Tower. One dissenter said she was there “protesting everything he embodies.” Next to her, a man said he was hopeful that the 2016 election would put an end to “the fetishization of American capitalism.”

RT @HansMahncke: Curtis Heide is the second FBI official who was directly in charge of the @GeorgePapa19 investigation who is now implicate…
126

RT @EpochTimes: The @FBI kept its agents in the dark about the fact that the allegations of secret communications between Trump and a Russi…
95

RT @RandPaul: “As part of this plan, the WHO has contracted Deutsche Telekom to develop a global vaxx passport system, with plans to link e…
5.5K