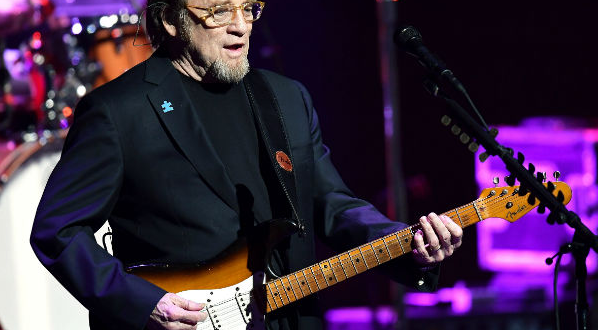 The most extraordinary moment of the Democratic National Convention so far has not been the awkward silence that has met the conclusion of every speech, or even the regrettable cutaway shots of bored-looking people watching the stream from their living rooms.

Rather, it was the cringe-inducing musical finale to Monday night’s broadcast.

Most news networks cut away to commentary immediately following Michelle Obama’s keynote speech, but those watching the Democratic Party’s livestream were treated to three of the most unintentionally entertaining minutes of television in recent memory.

The opening chords of Buffalo Springfield’s “For What It’s Worth” — that most cliched of 1960s protest anthems — started up, augmented by a bland hip-hop beat.

Songwriter Stephen Stills himself appeared with his guitar, joined by a man wearing what can best be described as a black tie-optional wingsuit. Behind them, a blue screen projected Black Lives Matter hero worship material with the professionalism one might expect from a high school audio-visual club.

If you haven’t seen it, the DNC “For What It’s Worth” video is worth a watch.

It may prove timeless in the annals of political comedy.

The video’s true significance, however, lies in what it reveals about the organization that produced it. Intentionally or not, the Democrats created a symbol of the incoherence and contradictions at the heart of the Biden campaign.

Transmuting a classic protest anthem onto images of contemporary BLM unrest is a perfect analogy for Joe Biden’s candidacy, and not simply because he’s almost the same age as Stephen Stills.

Like Biden himself, 1960s counterculture is an obsolete lens through which left-leaning Americans prefer to view the events unfolding around them.

Like “For What It’s Worth,” Biden is hopelessly alienated from those events, and his nomination functions primarily as an attempt to convince liberal baby boomers that they are still in control.

The reality is that the politics of 2020 have virtually nothing to do with our culture’s rose-tinted recollection of the 1960s upheavals.

Far from being rebellious today, the ideas that boomers embraced during the hippie era have been dominant in American discourse for decades.

The failures and excesses of that era, on the other hand, are largely whitewashed or forgotten. The elements lionized by the DNC video’s imagery — and frankly, the Democratic Party’s actual platform — far more closely resemble the elements of 1960s radicalism that always get left out of montages that have “For What It’s Worth” playing in the background.

Abolish the police, empty the jails, end the suburbs, tear down our Founders.

These are all things that the Bernadine Dorns and Abbie Hoffmans of the 1960s enthusiastically supported, but that’s not how today’s cultural establishment remembers things. The radicals of today — in at least a few cases, literally the same people who were pulling this insane crap in the 1960s — are trying to take advantage of the paradigm of harmless boomer nostalgia.

With the “For What It’s Worth” video, the DNC is trying to convince Americans that everything on the left is business as usual, a “return to normality,” or even a rehash of the Clinton-Gore era.

He’s supposed to be viewed as a throwback to a time when the Democratic Party kept most of its kookiest followers and fellow-travelers on the sidelines. Like the “For What It’s Worth” finale at the DNC, however, it doesn’t quite work.

It’s obvious that Biden has virtually no control over the train he’s supposedly driving.

Behind him sit the ideological descendents of the radicals who were rejected back when Biden was a young man — and like the guy flapping his wingsuit around, the radicals are the main event, not the perpetually-confused septuagenarian candidate whose name appears on the ballot.

RT @elonmusk: @jonfavs I’ve just switched from moderate D to moderate R, as I think many independent voters have done. We will know the m…
4.1K

RT @RealSLokhova: #SpecialCounselDurham Opening Statement "The evidence will show that this is a case about privilege: the privilege of a w…
244