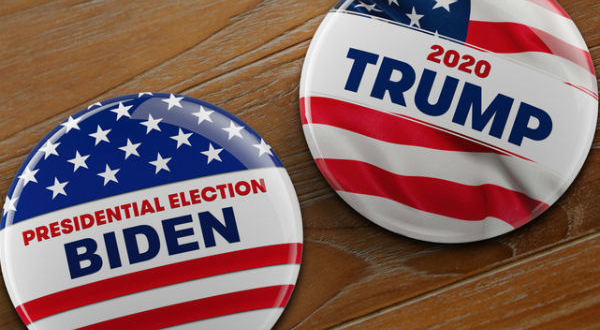 Former Vice President Joe Biden recently urged President Trump to “wake up” and save the country, yet Biden is the one who can’t keep his chin off his chest during a crisis.

The presumptive Democrat nominee has been missing in action for the past several months, rarely emerging from his basement and refusing to hold a single press conference for over 80 days.

Biden’s response to the coronavirus pandemic, for instance, has been anything but proactive. From the earliest days of the outbreak, he criticized President Trump for doing too much to prevent the spread of the virus in America, initially insisting that the life-saving White House ban on travelers from China was “xenophobic.”

“This is no time for Donald Trump’s record of hysteria and xenophobia — hysterical xenophobia — and fear mongering to lead the way instead of science,” he said earlier this year.

Notably, experts have since acknowledged that President Trump’s travel ban has played a key role in curbing the early spread of the Chinese contagion in the U.S., saving countless American lives.

Similarly, while President Trump was busy holding daily coronavirus briefings and spearheading historic legislation to safeguard the U.S. economy, Biden was busy dodging press inquiries in a desperate attempt to avoid making new gaffes. And on the rare occasion that Biden did address his supporters, his core focus was critiquing the president’s policies rather than offering meaningful solutions to the crisis.

Predictably, Biden deployed the same passive strategy to address the recent wave of destructive riots across America, issuing the softest possible condemnation of the radical calls to defund the police.

The Biden Campaign has continued to keep the former vice president out of the media spotlight in recent days, and for good reason — shortly prior to the flurry of anti-law enforcement protests, Biden arrogantly asserted that black voters “ain’t black” if they don’t support him in November.

“Americans know the truth: Without police, there is chaos; without law, there is anarchy; and without safety, there is catastrophe,” Donald Trump declared.”We need leaders at every level of government who have the moral clarity to state these obvious facts.”

Biden’s lackluster leadership, exemplified by his unwillingness to hold a single press conference for almost three months, is exactly why his supporters are quickly losing enthusiasm for his campaign. The media tried to portray President Trump’s recent rally in Tulsa as a failure because “only” about 12,000 people showed up, but the fact is that there were more people in the bathroom in Tulsa at any given time during that event than there are at any Biden event.

Moreover, the Tulsa rally was a stunning success in terms of overall engagement.

The Trump Campaign has also reported record audience figures on its own live streaming platforms, easily making the president’s rally one of the most watched political events of this election cycle. Across all platforms and networks, more than 20 million Americans watched live coverage of the Tulsa rally.

The only presidential candidate who keeps snoozing during national crises is Sleepy Joe Biden, which is precisely why his supporters are nearly as disengaged with his campaign as the candidate himself. The American people deserve a leader who is capable of handling any challenge that is facing our great country with alacrity and vigor, and that leader is — Donald J. Trump.

RT @HansMahncke: Curtis Heide is the second FBI official who was directly in charge of the @GeorgePapa19 investigation who is now implicate…
119

RT @EpochTimes: The @FBI kept its agents in the dark about the fact that the allegations of secret communications between Trump and a Russi…
57

RT @RandPaul: “As part of this plan, the WHO has contracted Deutsche Telekom to develop a global vaxx passport system, with plans to link e…
4.8K