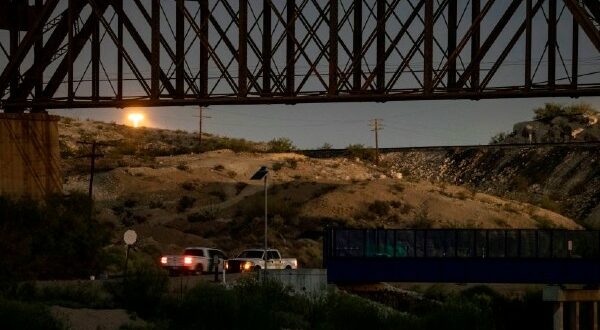 January is National Slavery and Human Trafficking Prevention Month and the Trump administration is not letting the month pass without a serious effort to raise awareness about this modern scourge.

Many Americans do not entirely appreciate the sheer scale of the inhumanity involved in human trafficking and the international sex trade. A 2004 State Department estimate found that in a typical year, between 600,000 and 800,000 victims are trafficked across international borders, the majority being women and girls destined for prostitution or sex slavery. The average age of these victims is between 12 and 14 years old.

America, unfortunately, is one of the prime destinations for human trafficking from around the world. The first line of defense is the Border Patrol and the U.S. Customs and Immigration Services (USCIS), which are charged with catching human traffickers and identifying victims and potential victims.

Despite tightening border security, some victims inevitably make it into the country, where they are often kept in appalling conditions and forced to work off their “debt” to their captors by servicing more than a dozen sex buyers a day. Their best chance for salvation has been and remains the valiant work of Homeland Security Investigations, a division of U.S. Immigration and Customs Enforcement (ICE).

All these federal agencies fall under the purview of the Department of Homeland Security. The leaders President Trump has put in place at DHS are taking this problem seriously, putting trafficking prevention at the center of immigration and border security policy.

Chad Wolf, acting Secretary of Homeland Security, spoke on the matter at the Heritage Foundation in Washington, D.C., on January 15, highlighting the efforts his department is making to combat human trafficking. He unveiled plans to bring tech companies — which provide the platforms on which victims are bought, sold, and advertised — into the fight, as well as initiatives to make sure that all law enforcement agencies get the training they need to recognize victims and the international criminal organizations that profit off their misery.

Acting ICE Director Michael Albence was also on hand for a panel on human trafficking. In subsequent comments to Breitbart News, he shed light on a particularly dreadful aspect of the human trafficking system: the practice of renting out children — often the same ones vulnerable to sexual exploitation — to help illegal immigrants gain entry into the United States by posing as family units. These children are “recycled” to make the dangerous trek northward again and again. Identifying and rescuing these children is a key part of securing our border and ending the incursions of so-called “caravans” of illegal migrants.

The Trump administration is clearly taking these matters seriously. What worries me is that politicians on the other side of the aisle — some of whom chant such outrageous slogans as “abolish ICE” — seem more concerned with maligning the law enforcement officers who are combatting human trafficking than with supporting them in their mission.

Democratic House Border Security Subcommittee Chairwoman Kathleen Rice, for example, decided to mark Human Trafficking Prevention Month by harping on the exceedingly rare incidents in which minors have died in U.S. custody — usually after being found in terrible condition in the desert — rather than the thousands of cases in which the same officials have rescued children from a fate worse than death.

This January, I hope Americans become more aware of both the human trafficking crisis and the efforts the Trump administration is making to end it. We can’t let this important work be sidetracked by politics.

RT @HansMahncke: Curtis Heide is the second FBI official who was directly in charge of the @GeorgePapa19 investigation who is now implicate…
129

RT @EpochTimes: The @FBI kept its agents in the dark about the fact that the allegations of secret communications between Trump and a Russi…
104

RT @RandPaul: “As part of this plan, the WHO has contracted Deutsche Telekom to develop a global vaxx passport system, with plans to link e…
5.8K