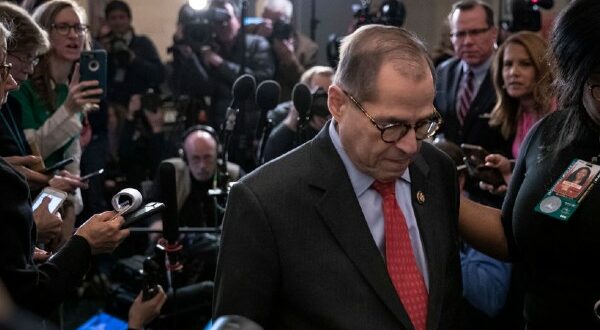 After spending the past 3 years making grandiose proclamations about the need to impeach President Trump, all the Democrats have been able to come up with are two flimsy charges that the president rightly derides as “impeachment lite.”

Representative Adam Schiff, now the lead producer of “Mystery Impeachment Theater,” repeatedly told the public that he was privy to “ample evidence of collusion,” only for former Special Counsel to demolish those claims following an exhaustive investigation. Amidst the ongoing Ukraine saga, Democrats promised a second whistleblower who never materialized. And those are just two examples of Democrats claiming to have evidence that never actually existed.

They have constantly manipulated the public into thinking definitive proof of wrongdoing was just around the corner, only for their claims to be debunked in every instance. Democrats and their media allies, of course, never corrected the record, and let the black cloud of investigations hang over this administration.

Just consider how much House Democrats have waffled over the course of their impeachment crusade. They started off by accusing the president of a “quid pro quo,” then switched over to bribery and obstruction of justice when the original accusation failed to gain traction, and ultimately had to settle for the nebulous charges of “obstruction of Congress” and “abuse of power” once it became clear that even their focus-grouped rhetoric was failing to move the needle in favor of impeachment.

“The House Democrats are walking back from everything they claimed,” President Trump told the crowd at a recent rally in Hershey, Pennsylvania. “With today’s announcement, they’re now admitting there was no collusion, there was no obstruction of justice, and there were no crimes whatsoever.”

“They’re impeaching me and there are no crimes,” he scoffed. “This has to be a first in history.”

President Trump is right: as many commentators have noted, the impeachment articles filed by the House Democrats are unprecedented, because no previous Congress has dared to abuse the impeachment power for such blatantly political purposes.

For one thing, the Democrats have not charged President Trump with any discernible crime, merely accusing him of violating ambiguous standards they themselves created.

The “obstruction of Congress” charge, for instance, is based on the administration’s assertion of executive privilege with respect to the sham impeachment inquiry. There’s a legitimate constitutional question at stake there, but rather than letting the courts adjudicate the matter, House Democrats simply declared the president’s invocation of executive privilege to be illegitimate.

The case for “abuse of power” is equally ridiculous, as the Democrats tacitly admitted when they abandoned their “quid pro quo” rhetoric and started casting about for charges that would be less facially absurd. By the time their bumbling impeachment inquiry was over, the Democrats had been reduced to arguing, in essence, that the president had to be impeached because he took positions at odds with those held by career bureaucrats and national security “experts.”

The fact that Democrats have settled on such weak charges is as close to a total exoneration as President Trump is going to get from House Democrats and the mainstream media. Everyone knows that these charges are the left’s effort to save face after being thoroughly discredited by years of hyperbole and false promises. It’s “impeachment lite,” and it’s a far cry from the dramatic charges the Democrats have been promising for 3 years.

RT @elonmusk: @jonfavs I’ve just switched from moderate D to moderate R, as I think many independent voters have done. We will know the m…
4.2K

RT @RealSLokhova: #SpecialCounselDurham Opening Statement "The evidence will show that this is a case about privilege: the privilege of a w…
245